In November 2013, Jacksonville’s City Council approved $63 million in improvements to EverBank Field – the home of the NFL’s Jacksonville Jaguars. Highlights of the improvements included a north end zone fun enjoyment area and two new end zone scoreboards that are the largest of their kind in the world.

This high-profile, aggressively scheduled project was a Campbell Plumbing success story. The work required the complete demolition and reconstruction of the entire second and third level decks at the north end of Everbank Field – requiring the removal of approximately 7,000 seats. Our plumbing scope included domestic water, sanitary sewer, massive trench drains, and stainless steel piping. In order to ease the strain of the aggressive schedule, much of our plumbing work was prefabricated off-site. Entire groups of water closet carriers were built, transported to the jobsite as single units, and set in place. The overall project schedule allowed for only 120 days from the day the structural demolition by others began. Campbell worked directly with the joint venture construction team of Hunt+Elkins. The project Owner was also a joint venture arrangement, this one between the City of Jacksonville and the NFL’s Jacksonville Jaguars. This entire project was a closely watched, high-profile undertaking with zero-tolerance for failure – harsh liquidated damages saw to that! Campbell Plumbing did not miss a single milestone from start to finish. The project was completed in July 2014.

Testimonial Letter from the President of the Jacksonville Jaguars, Mark Lamping 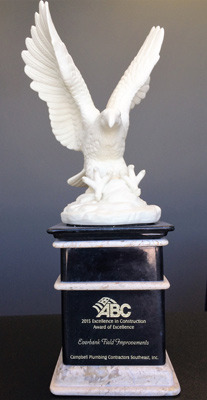 Campbell Plumbing & Mechanical Contractors was awarded an "Eagle" in the 2015 Associated Builders and Contractors Excellence in Construction competition. Campbell earned the top-prize for their performance on the Everbank Field Improvements project in Jacksonville, FL. This award is given to those that have achieved the extraordinary during construction. The following aspects of the Everbank project clinched the top award for Campbell: